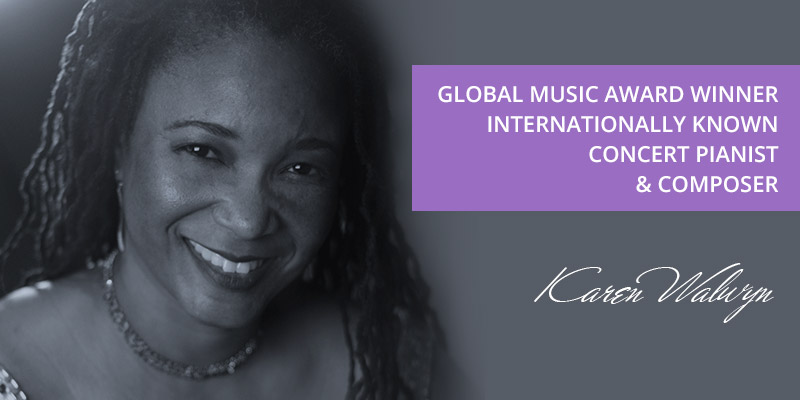 Concert Pianist/Composer and Recording Artist for Albany Records, Karen Walwyn, was recently invited by the Center of Black Music Research of Chicago to perform and record the premier recording of the Florence Price Concerto for Piano (Albany Records): “Walwyn provides a magnificent account of the concerto displaying her considerable technical skills”, reviewed by Bob McQuiston at NPR.

Known for her recordings of her two volumes of music by American composers entitled Dark Fires Ms. Walwyn performed works from her CDs at her New York debut, National Public Radio, (NPR), and on WFMT, Chicago, IL. ” Walwyn was fearless throughout, managing every challenge with precise fingers and heroic command of textures.”…“The pianism of Karen Walwyn lends to her artistic abilities as a communicator.” – The Cleveland Plain Dealer. The American Record Guide says, “Walwyn is a confident and impressive pianist…”. According to the Washington Post,

Dr. Walwyn has recently completed a year on Sabbatical from Howard University having been awarded a Mellon Faculty Fellowship (2011-12) from the John Hope Franklin Institute at Duke University where she completed her debut choral/solo piano/African Percussion work entitled Of Dance & Struggle; A Musical Tribute on the life of Nelson Mandela debuted by the Elon University Chorale directed by Dr. Gerald Knight.

Ms. Walwyn remains busy with concerts of new works, works from the standard literature as well as her own works, master classes and lecture recitals across the country and internationally. Some recent concerts include appearances in Johannesburg-South Africa, Barcelona-Spain, Tenerife- Canary Islands, Salzburg-Austria, London-England, Nice- France and locally to numerous music halls and university campuses including the University of Michigan, Duke University, the University of Indiana, the University of Miami, and the University of Hawaii. As well, learn about Karen’s other passion, which is recorded albums of music to sooth your pet by clicking here.